Royal seal impressions were discovered in excavations of the Israel Antiquities Authority at Umm Tuba, in the southern hills of Jerusalem.

Considering the limited area of the excavation and the rural nature of the structure that was revealed, the excavators were surprised to discover in it so many royal seal impressions that date to the reign of Hezekiah, King of Judah (end of the eighth century BCE). Four “LMLK” type impressions were discovered on handles of large jars that were used to store wine and oil in royal administrative centers. These were found together with the seal impressions of two high ranking officials named Ahimelekh ben Amadyahu and Yehokhil ben Shahar, who served in the kingdom’s government. The Yehokhil seal was stamped on one of the LMLK impressions before the jar was fired in a kiln and this is a very rare instance in which two such impressions appear together on a single handle. 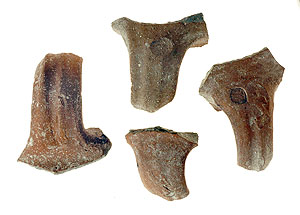 Another Hebrew inscription, 600 years later than the seal impressions of the Kingdom of Judah, was discovered on a fragment of a jar neck that dates to the Hasmonean period. An alphabetic sequence was engraved with a thin iron stylus below the vessel’s rim in Hebrew script that is characteristic of the beginning of the Hasmonean period (end of the second century BCE). The letters hay to yod and a small part of the letter kaf were preserved on the sherd. Similar inscriptions bearing alphabetic sequences were discovered in the past, usually on ostraca (inscriptions written in ink on pottery sherds) or engraved on ossuaries (stone receptacles in which human bones were buried). The alphabetic inscription that was discovered in this instance is unique and the significance of it requires further study: was this a “writing exercise” done by an apprentice scribe or should we ascribe it some magical importance? 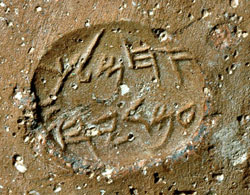 The remains of the large building included several rooms arranged around a courtyard. Pits, agricultural installations and subterranean silos were hewn inside the courtyard. A potter’s kiln, a large columbarium cave in which there is a rock-hewn hiding refuge, pottery vessels, etc were also discovered inside the built complex. The pottery vessels that were recovered from the ruins of the building indicate it first dates to the end of the Iron Age (the First Temple period) in the eighth century BCE. Following its destruction, along with Jerusalem and all of Judah during the Babylonian conquest, Jews reoccupied it in the Hasmonean period (second century BCE) and it existed for another two hundred years until the destruction of the Second Temple. During the Byzantine period the place was reinhabited as part of the extensive rural settlement of monasteries and farmsteads in the region between Jerusalem and Bethlehem.

Some three years ago the impressive remains of a monastery from this period were excavated that together with the remains of the current excavation confirm the identification of the place as “Metofa”, which is mentioned in the writings of the church fathers in the Byzantine period. The name of the Arab village, “Umm Tuba” is therefore a derivation of Byzantine “Metofa”, which is Biblical “Netofa” and is mentioned as the place from which two of David’s heroes originated (2 Samuel 23:28-29).
Posted by Jonathan Kantrowitz at 8:54 AM