A spacious edifice from the Roman period (third century CE) – apparently a mansion that belonged to a wealthy individual – was recently exposed in the excavations the Israel Antiquities Authority is carrying out in the 'Givati Car Park' at the City of David, in the Walls Around Jerusalem National Park. 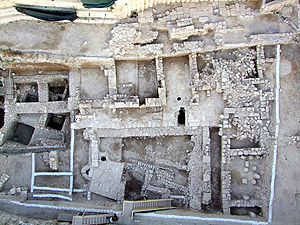 According to Dr. Doron Ben-Ami, the excavation director on behalf of the IAA, together with Yana Tchekhanovets, “Although we do not have the complete dimensions of the structure, we can cautiously estimate that the building covered an area of approximately 1,000 square meters. In the center of it was a large open courtyard surrounded by columns. Galleries were spread out between the rows of columns and the rooms that flanked the courtyard. The wings of the building rose to a height of two stories and were covered with tile roofs”.

A large quantity of fresco fragments was discovered in the collapsed ruins from which the excavators deduced that some of the walls of the rooms were treated with plaster and decorated with colorful paintings. The painted designs that adorned the plastered walls consisted mostly of geometric and floral motifs. Its architectural richness, plan and particularly the artifacts that were discovered among its ruins bear witness to the unequivocal Roman character of the building. The most outstanding of these finds are a marble figurine in the image of a boxer and a gold earring inlaid with precious stones. 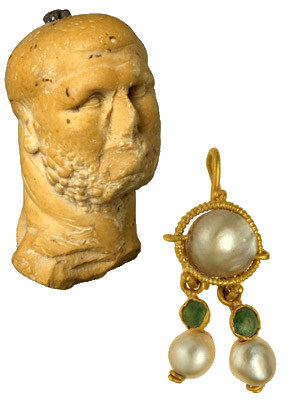 The building, which was constructed during the third century CE, was shaken by a tremor in the fourth century, the results of which are clearly apparently in the excavation area:the walls of the rooms caved-in and their stone collapse, which was piled high, covered the walls of the bottom floor, some of which still stand to a considerable height. Architectural elements such as columns and capitals, as well as mosaics and the large amount of fresco fragments that were used in the rooms of the second story were discovered inside the collapsed ruins. The coins that were discovered among the collapse and on the floors indicated the building’s ruins should be dated to circa 360 CE. It seems that what we have here is archaeological evidence of the results of the earthquake that struck our region in 363 CE.

Dr. Ben-Ami adds, “We know of no other buildings from the Roman period that were discovered in Israel which have a similar plan to that of the building from the City of David. The closest contemporary parallels to this structure are located in sites of the second-fourth century CE that were excavated in Syria. Edifices such as these are “urban mansions” from the Roman period that were discovered in Antioch, Apamea and Palmyra. If this parallel is correct, then in spite of its size and opulence, it seems that this building was used originally as a private residence”.

The exposure of the Roman building in the City of David is a significant contribution to our understanding of the extent of the construction in the Roman city in the third-fourth centuries CE. It constitutes extremely important archaeological evidence regarding the growth of the settlement at the end of the Roman period into the southern precincts of the city, and it shows that the prevailing supposition among scholars according to which the City of David hill remained outside the area of Roman settlement at the time of the Aelia Capitolina is no longer valid.
Posted by Jonathan Kantrowitz at 8:39 AM