"The Heliodoros stele" and the Maccabean Revolt

"The Heliodoros stele"- consisting of 28 lines inscribed on limestone is considered one of the most important ancient inscriptions found in Israel. Recently, three smaller fragments of a Greek inscription were found at an Israel Antiquities Authority excavation at Maresha.

The stele adds important archaeological evidence and historical context for understanding the period of time leading up to the Maccabean Revolt, an event celebrated each year on the holiday of Hanukah. 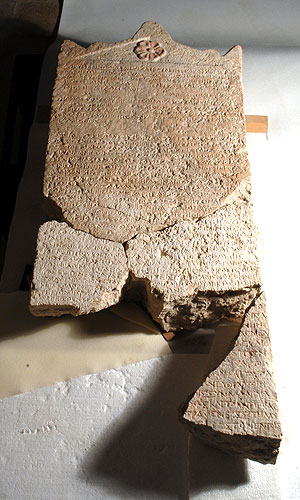 The Heliodoros Stele - with all of its pieces restored - photograph Peter Lenny, Israel Museum Jerusalem

This royal stone stele bears a proclamation by the Seleucid king, Seleucus IV (brother of Antiochus IV), and dates to 178 BCE. The contents of the stele shed light on the Seleucid government's involvement in local temples, mentioning an individual named Olympiodoros, the appointed "overseer" of the temples in Coele Syria – Phoenicia, including Judea. The order of the king was sent to Heliodorus, who was probably the same person mentioned in II Maccabees 3.

According to the story in Maccabees, Heliodorus, as the representative of King Seleucus IV, tried to steal the wealth from the Temple in Jerusalem but instead was severely beaten as a result of divine intervention. Three years later Seleucus IV was assassinated and was succeeded by his brother Antiochus IV, who was the ruler who according to II Maccabees eventually issued an edict of persecution against the Jewish people and desecrated the Temple in Jerusalem leading to the Maccabean Revolt.
Posted by Jonathan Kantrowitz at 9:00 AM

Time causes so much destruction. And that's only from 180 B.C.

Everything before 5000 B.C. is pretty much blank.

History is as unknown and unpredictable as the future.