Inscription from the Period of the Kings of Judah

A fragment of a limestone plaque bearing several letters of ancient Hebrew script was discovered while sifting soil that was excavated in the vicinity of the Gihon Spring, within the precincts of the “Walls around Jerusalem National Park”. 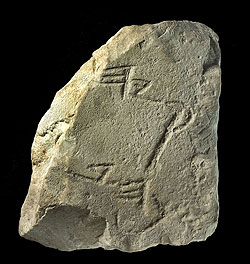 The stone fragment dates to the eighth century BCE and this is based on the numerous pottery sherds that were discovered together with it, as well as the shape of the Hebrew letters that are engraved in the inscription.

The plaque is broken on all sides. All that remains of the inscription are two lines of writing: In the upper line the last part of a given name is preserved: ...]קיה, or as it is transliterated into English …]kiah. Unfortunately the remains of another letter before the kof cannot be discerned. If the letter preceding the kof was a zayin, we could complete the name to read חזקיה, or Hezekiah in English, and perhaps ascribe historical importance to the inscription. On the other hand, there are other first names that were used in Judah and Jerusalem at that time that could be mentioned here such as Hilkia, Amekiya, etc.

In the second line are the remains of two words. Here too, is a suffix of a word: ...]כה, or as it is transliterated into English …]ka. Here we have several possibilities for completing the word such as: בְּרָכָה, or birqa, that is, a greeting expressing best wishes (a possible ending for some sort of commemorative inscription). Another possibility is the word בְּרֵכָה, or brecha, meaning water reservoir. The reconstruction of this word is possible based on the fact that Brechat HaShiloah, or the Shiloah Pool in English, is located nearby, and also based on the fact that a pool is mentioned in the famous Shiloah inscription that was discovered close by.

In any event the fact that we are dealing with a stone plaque indicates that this is a commemorative inscription that may have been meant to celebrate some sort of building project.

All that remains is to wait and hope that in time other fragments of the inscription will be found.
Posted by Jonathan Kantrowitz at 8:42 AM