AVDAT, Israel — For thousands of years, different groups of people have lived in the Negev desert, building stone walls and cities that survive to this day. But how did they make their living?

The current thinking is that these desert denizens didn't practice agriculture before approximately the first century, surviving instead by raising animals, said Hendrik Bruins, a landscape archaeologist at Ben-Gurion University of the Negev.
But new research suggests people in this area, the Negev highlands, practiced agriculture as long ago as 5000 B.C., Bruins told LiveScience. If true, the finding could change historians' views of the area's inhabitants, who lived in the region in biblical times and even before, he added...

He found three distinct layers in the earth indicating that the field had been cultivated, corresponding to three different periods of activity, with long gaps in between. The first one dated from 5000 B.C. to 4500 B.C., followed by another from 1600 B.C. to 950 B.C. and a final layer dating from A.D. 650 to A.D. 950.
The first group of people that farmed here has no current known name, he said, but developed flint tools that have been found throughout the region.

The second period of agriculture, from 1600 B.C. to 950 B.C., corresponds to the time in which the Jews made their way from Egypt to modern-day Israel, according to Exodus and other books of the Bible, Bruins said.

The site where Bruins conducted his research, south of Beersheba, is likely to the south and east of where historians place the Israelites during this time period, he said. But it could possibly have been home to tribes associated with the Amalekites, a group living in the area at the time that was hostile to the Israelites, Bruins said..

Posted by Jonathan Kantrowitz at 6:35 PM No comments: 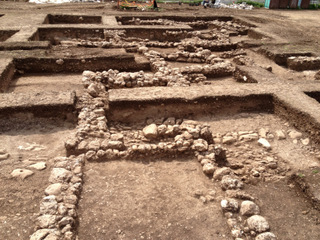 Among the finds: thousands of broad bean seeds and a large number of arrowheads and stone axes.


A new site dating to the Stone Age was exposed in large scale archaeological excavations the Israel Antiquities Authority is carrying out at Ahihud Junction prior to the construction of a new railroad line to Karmiel by the National Roads Company. In the excavations, which are spread over 1,800 square meters, remains of two main periods were discovered: the Pre-Pottery Neolithic period and the Early Chalcolithic period (seventh millennium BCE – fifth millennium BCE).
According to Dr. Yitzhak Paz and Dr. Yaʽakov Vardi, excavation directors on behalf of the Israel Antiquities Authority,

“For the first time in the country, entire buildings and extensive habitation levels were exposed from these early periods, in which the rich material culture of the local residents was discovered”. The ancient settlement remains ascribed to the Pre-Pottery Neolithic period were discovered on top of the bedrock in which the ancient inhabitants hew different installations, and even built plaster floors in several spots.

“We found a large number of flint and obsidian arrowheads, polished miniature stone axes, blades and other flint and stone tools. The large amount of tools made of obsidian, a material that is not indigenous to Israel, is indicative of the trade relations that already existed with Turkey, Georgia and other regions during this period”.

According to the archaeologists, “Another unique find that can be attributed to this period is the thousands of charred broad bean seeds that were discovered together inside a pit. The Neolithic and Chalcolithic societies were agrarian societies that resided in villages, and it was during these periods that the agricultural revolution took place, when plants and animals were domesticated. This is one of the earliest examples of the proper cultivation of legumes in the Middle East”.

The remains of the Early Chalcolithic period (fifth millennium BCE) that were revealed at the Ahihud site include a village where there were a number of buildings with rectilinear rooms. Inside the buildings’ walls, which were very thick, were discovered installations that were built of stone and clay, some of which were covered with plaster. Remains of the Wadi Rabah culture were revealed inside the buildings and in the open areas between them.

These include a large number of pottery vessels indicative of a highly developed pottery industry, flint tools, stone objects, as well as a number of unique artistic artifacts, among them a phallic figurine and a palette on which female genitals are schematically etched – these symbols also represented the fertility of the earth.

A preliminary analysis of the animal bones discovered at the site shows that pigs were a principal staple in the diet of the inhabitants.

Posted by Jonathan Kantrowitz at 7:07 AM No comments:

The Egyptian Fortress in Jaffa

Situated on the central coast of Israel, on the south side of Tel Aviv, and 60 km to the northwest of Jerusalem, Jaffa’s antiquity and importance as a Mediterranean port was well established before the resumption of excavations in 2008 by the Jaffa Cultural Heritage Project. While the biblical texts have served as a primary historical referent, Jaffa’s importance in other periods is much more clearly understood in classical sources including Josephus, but also even from Egyptian New Kingdom literature and administrative documents. Following excavations during the 1950s of the archaeological remains of an Egyptian fortress in Jaffa, a fortress that existed for most of the Late Bronze Age (ca. 1460 to 1130 BC), seeking to understand Jaffa’s role in the Egyptian New Kingdom imperial control of Canaan became of paramount importance...

(At the) Battle of Megiddo (ca. 1456 BC)... the pharaoh Thutmose III fell upon the Asiatic coalition, which was led by the king of Kadesh on the Orontes. In the wake of the pharaoh's victory numerous towns were listed as subjugated, their troops likely among the defeated coalition at Megiddo. Among these towns, and the most southern settlement listed, was the coastal city of Jaffa, known to have been inhabited since the Middle Bronze Age, from at least ca. 1800 BC.

While little outside of the listing of Jaffa can shed light on the historical circumstances surrounding its conversion from Canaanite town to Egyptian stronghold, new archaeological data combined with well-known historical texts of the Late Bronze Age are now shedding light on the nature of interactions between the Canaanite inhabitants of Jaffa and its environs and the Egyptian inhabitants of the New Kingdom fortress built atop the city’s earlier remains. The resulting picture is one colored by episodes of violence and peaceful social interactions in Jaffa over a period of more than 300 years, from ca. 1460 to 1130 BC...

Posted by Jonathan Kantrowitz at 9:48 AM No comments: