A Samaritan synagogue, c. 1,500 years old, was discovered before the holidays, southwest of Bet She’an.

The remains of a synagogue and farmstead that operated in the Late Byzantine period, which were unknown until now, were exposed in an archaeological excavation conducted on behalf of the Israel Antiquities Authority and underwritten by the Ministry of Construction and Housing, prior to enlarging a residential quarter south of Bet She`an, c. one half kilometer west of the Jordan Valley highway (Route 90).

According to Dr. Walid Atrash and Mr. Ya’aqov Harel, directors of the excavation for the Israel Antiquities Authority, “The discovery of another Samaritan synagogue in the agricultural hinterland south of Bet She’an supplements our existing knowledge about the Samaritan population in this period. It seems that the structures uncovered there were built at the end of the fifth century CE and they continued to exist until the eve of the Muslim conquest in 634 CE, when the Samaritans abandoned the complex. The synagogue that is currently being revealed played an important part in the lives of the farmers who inhabited the surrounding region, and it served as a center of the spiritual, religious and social life there. In the Byzantine period (fourth century CE) Bet She’an became an important Samaritan center under the leadership of Baba Rabbah, at which time the Samaritans were granted national sovereignty and were free to decide their own destiny. This was the case until the end of the reign of Emperor Justinian, when the Samaritans revolted against the government. The rebellion was put down and the Samaritans ceased to exist as a nation”.

The building that was exposed consisted of a rectangular hall (5 x 8 meters), the front of which faces southwest, toward Mount Gerizim, which is sacred to Samaritans. Five rectangular recesses were built in the walls of the prayer hall in which wooden benches were probably installed. The floor of the hall was a colorful mosaic, decorated with a geometric pattern. In the center of the mosaic is a Greek inscription, of which a section of its last line was revealed:T[]OUTON NEWN meaning “This is the temple”. 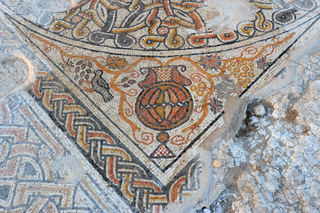 According to Dr. Leah Di Segni of the Hebrew University of Jerusalem, who translated the inscription, the plan of the building, its orientation and the content of the inscription are in keeping with a Samaritan synagogue.

It is well-known that two Samaritan synagogues were discovered in the past at Bet Sheʽan. One is called “Bet Leontis” and it consists of a complex of rooms arranged around a courtyard; a small prayer room (7 x 7 meters) that served as part of a hostel is located in the south of that building. The second – the Samaritan synagogue, located on Tel Iztabba – is situated outside the Byzantine city walls.

A farmstead that extends over an area in excess of 1,500 square meters was exposed next to the synagogue. The farmhouse was composed of a central courtyard surrounded by storerooms and in its southern part there was a residence, a guest hall and industrial installations.
Posted by Jonathan Kantrowitz at 6:50 AM No comments: