The Lod Mosaic And Its Builders 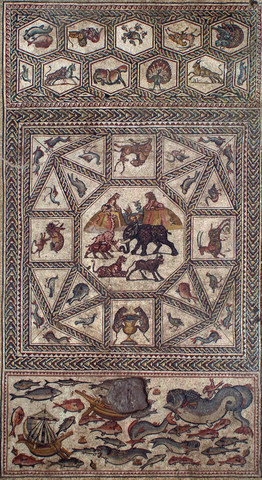 The 1,700 year old mosaic, which is one of the largest and most magnificent ever seen in Israel, was exposed in the city of Lod in 1996. It is a real archaeological gem that is extraordinarily well-preserved. It is c. 180 sq m in size. It is composed of colorful carpets that depict in great detail mammals, birds, fish, floral species, and sailing and merchant vessels that were in use at the time. It is believed the mosaic floor was part of a villa that belonged to a wealthy man in the Roman period.

Recently the conservators were surprised to discover that the builders of the beautiful mosaic left their personal mark there: while working on the plaster bedding which is done before attaching the mosaic, the artisans trod on it wearing sandals and in their bare feet. 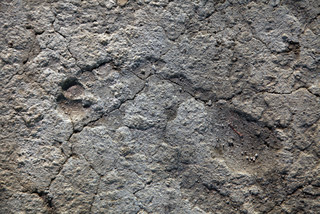 According to Jacques Neguer, head of the IAA Art Conservation Branch, “When removing a section of mosaic it is customary to clean its bedding, and that way study the material from which it is made and the construction stages. We look for drawings and sketches that the artists made in the plaster and marked where each of the tesserae will be placed. This is also what happened with the Lod mosaic: beneath a piece on which vine leaves are depicted, we discovered that the mosaic’s builders incised lines that indicate where the tesserae should be set, and afterwards, while cleaning the layer, we found the imprints of feet and sandals: sizes 34, 37, 42 and 44. At least one imprint of a sole resembles a modern sandal. Based on the concentration of foot and sandal prints it seems that the group of builders tamped the mortar in place with their feet”.

Neguer added, “The mosaic consists of three parts that different artists built, probably in different periods. There are different kinds of art here, and we can see that the hand that affixed the tesserae is different: a trained eye recognizes that the preparation which was done prior to the work is different. Besides the necessary professionalism, exposing the footprints is also the result of a lot of luck. It is not always possible to cut the layers of the mosaic precisely so that we discover such a clear picture of the plaster with the incising on it”.

Neguer states that, “the excitement here was great. It is fascinating to discover a 1,700 year old personal mark of people who are actually like us, who worked right here on the same mosaic. We feel the continuity of generations here”.

The hand and foot prints that were revealed will be removed from the area and will be conserved and returned to the site together with the mosaic, to the Shelby White and Leon Levy Lod Mosaic Archaeological Center.

The conservation of the site in Lod is meant to be a springboard that will boost tourism and a leverage that will alter the image of the city. The mosaic is located in the eastern part of Lod, next to the entrance at Ginnaton Junction. This intersection is easily reached from Ben Gurion Airport and from two of the country’s main highways: Highway 1, which connects Tel Aviv with Jerusalem, and Highway 6, which links the north of the country with the south. The site is situated between two streets: He-HalutzStreet, which leads to the marketplace and Struma Street, which leads to the city’s historic center. The location of the site next to the country’s main transportation arteries makes it highly accessible and will facilitate turning it into a site that is of interest to the entire country. The municipality, in cooperation with the Israel Antiquities Authority, plans to integrate it into a tourism circuit that will include a number of historic sites in the city.
Posted by Jonathan Kantrowitz at 8:34 AM