Photograph: the IAA Unit for the Prevention of Antiquities Robbery.

A number of suspects were apprehended in the early hours of Friday (28.3) in a joint operation by inspectors of the IAA Unit for the Prevention of Antiquities Robbery and detectives and patrolmen of the Shefet police station in Jerusalem. They were caught while in possession of eleven decorated stone ossuaries – ancient coffins – that the Jewish population used for burial in the Second Temple period, two thousand years ago. Some of the ossuaries still contained the skeletal remains of the deceased.

The suspects – residents of Jerusalem, Tel Aviv and the Arab village of Abadiyah, in the vicinity of Bethlehem – were caught red-handed by a team of patrolmen and detectives from the Shefet Station in Jerusalem when they were closing a deal to sell the ossuaries to Jewish merchants, near the Hizma checkpoint north of Jerusalem.

The inspectors of the IAA Unit for the Prevention of Antiquities Robbery immediately recognized that these are special ancient ossuaries of unique significance. It is suspected the ossuaries were recently looted from an ancient burial cave in the region of Jerusalem.

The suspects were arrested on the spot and taken in for questioning under caution by investigators of the IAA and the Shefet police station. Their remand was extended Friday morning by the Jerusalem Magistrates Court.

The Jewish population used stone ossuaries for secondary burial during the Second Temple period and they were very common from the second century BCE until the first century CE. The ossuaries are decorated with typical Jewish symbols, among them the lily flower, the six-petal rosette and other symbols. The decorations adorning the ossuaries were a major element of the Jewish art of the period.

Shallow engravings, etched in the past by means of a sharp stylus, were found on the walls of two of the seized ossuaries. They cite the names of the deceased whose bones were collected in the coffins. One of the engraved ossuaries that were found bore the name “Ralfin”, written in squared Hebrew script characteristic of the Second Temple period. This name is apparently a Hebraized form of an unusual Roman name. According to Dr. Eitan Klein, deputy director of the Unit for the Prevention of Antiquities Robbery, who examined the ossuaries, “this is the first time this name appears on an ossuary from the Land of Israel”. On the other ossuary is a Greek inscription that could not be deciphered, and below it the name “Yo‘azar”, in squared Hebrew script. The name Yo‘azar is a common Jewish name in the Second Temple period, and occurs in contemporary written sources, such as Josephus’ writings. The name appears in this form and a slightly different form – “Yeho‘azar” – on numerous Jewish ossuaries from this period.

Some of the ossuaries were engraved with inscriptions in squared Hebrew script, characteristic of the Second Temple period and some bore Greek inscriptions, including the names of the deceased.

According to Dr. Eitan Klein, “these are singular finds. The inscriptions on the ossuaries provide us with additional characters and names from amongst the Jewish population in the Second Temple period, and the motifs adorning the ossuaries will supplement our knowledge with new information about the world of Jewish art in this period”. Dr. Klein stated, “There is no doubt that the ossuaries were recently looted from a magnificent burial cave in Jerusalem. Remnants of paint remained on top of the ossuaries and the containers themselves belong to the group of “magnificent Jerusalem” ossuaries that were manufactured in the city in antiquity”.

The Israel Antiquities Authority reports that the bones found inside the ossuaries will be turned over to the Ministry of Religious Affairs for burial. 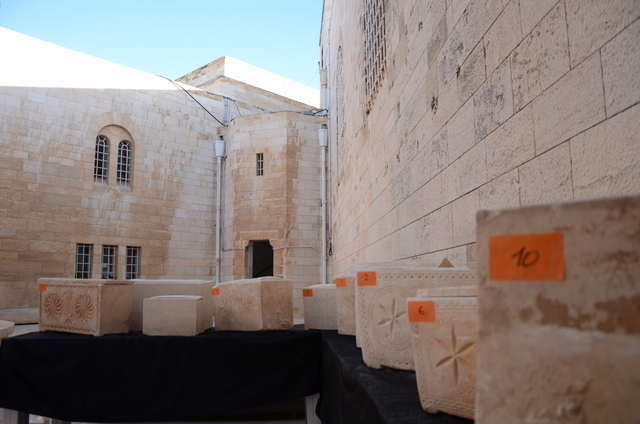 Posted by Jonathan Kantrowitz at 11:15 AM