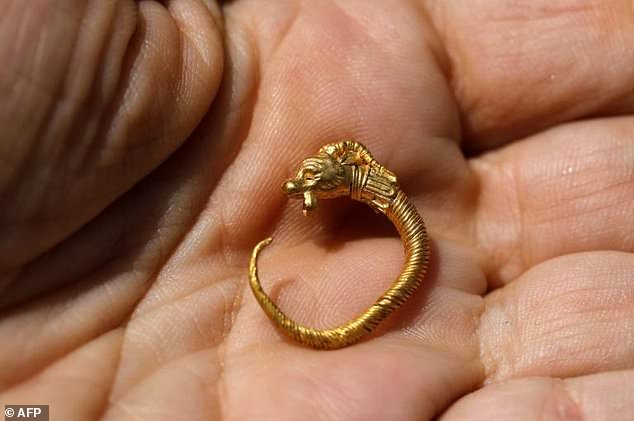 An Israeli archaeologist shows a golden earring believed to be more than 2,000 years old discovered at the site of a national park in annexed east Jerusalem near the Old City walls

Israel on Wednesday unveiled a golden earring dating from the second or third century BC, found in the shadow of the Old City walls in Israeli-annexed east Jerusalem.

The Israel Antiquities Authority (IAA) said the artifact, in the Hellenistic style and shaped like a horned animal, was found in October in the City of David National Park, between the Old City and the flashpoint Palestinian neighbourhood of Silwan.

The find was not announced publicly until now to give archeologists time to study the find and publish an academic paper.

"It is unclear whether the gold earring was worn by a man or a woman, nor do we know their cultural or religious identity, but we can say for certain that whoever wore this earring definitely belonged to Jerusalem's upper class," an IAA statement said, citing "the quality of the gold piece of jewelry".

Following the conquest of Alexander the Great in the 4th century BC, Jerusalem remained under Hellenist rule for the next 200 years.
Posted by Jonathan Kantrowitz at 2:26 PM