Using advanced imaging technology, Tel Aviv University researchers have discovered a hitherto invisible inscription on the back of a pottery shard that has been on display at The Israel Museum for more than 50 years. 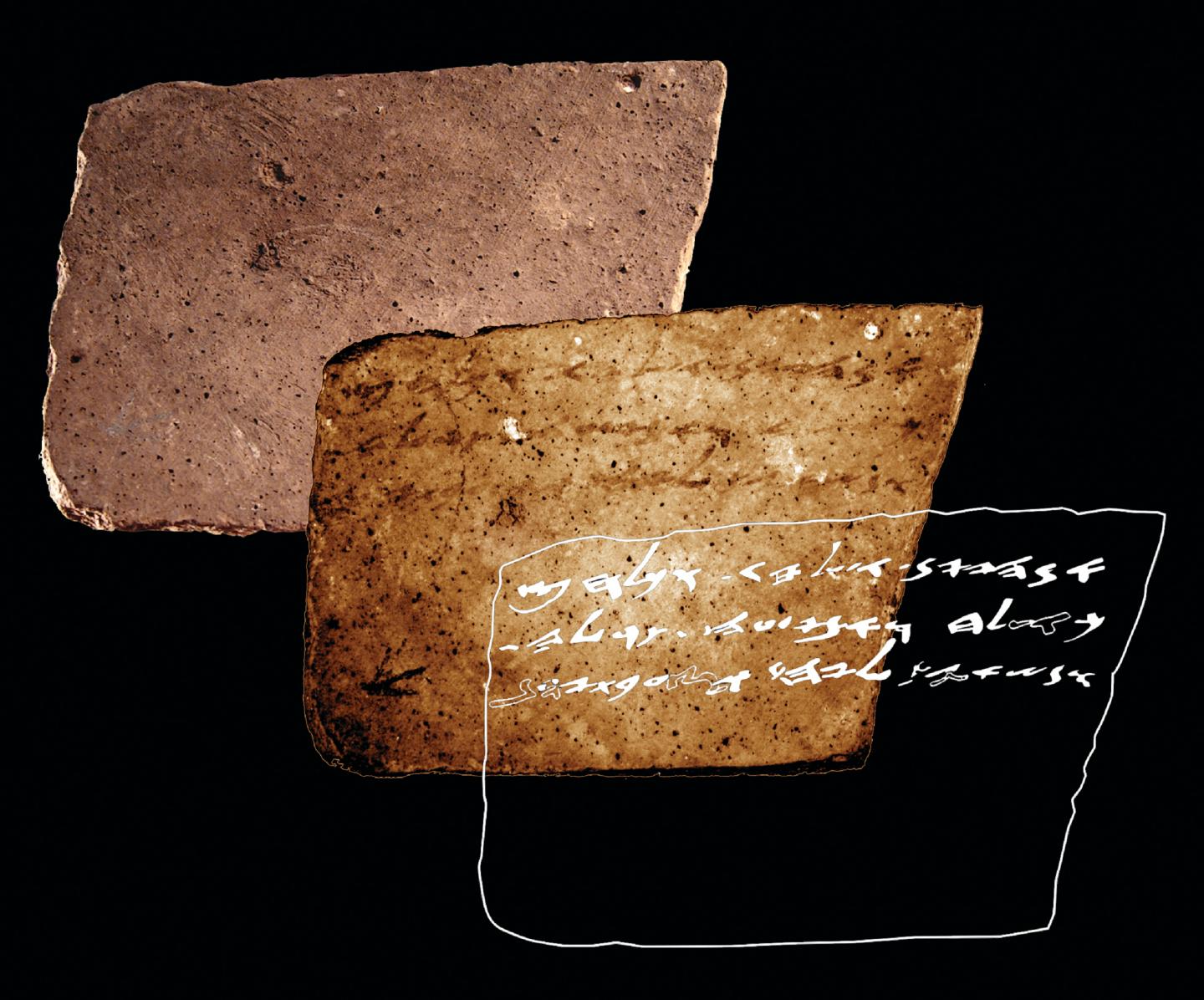 This is the inscription found on reverse of ostraca at Arad.
CREDIT
American Friends of Tel Aviv University (AFTAU)


The ostracon (ink-inscribed pottery shard) was first found in poor condition in 1965 at the desert fortress of Arad. It dates back to ca. 600 BCE, the eve of the kingdom of Judah's destruction by Nebuchadnezzar. The inscription on its front side, opening with a blessing by Yahweh, discusses money transfers and has been studied by archaeologists and biblical scholars alike.

"While its front side has been thoroughly studied, its back was considered blank," said Arie Shaus of TAU's Department of Applied Mathematics, one of the principal investigators of the study published today in PLOS ONE. The study can be found at http://journals.plos.org/plosone/article?id=10.1371/journal.pone.0178400.

"Using multispectral imaging to acquire a set of images, Michael Cordonsky of TAU's School of Physics noticed several marks on the ostracon's reverse side. To our surprise, three new lines of text were revealed," Shaus said.

The researchers were able to decipher 50 characters, comprising 17 words, on the back of the ostracon. "The content of the reverse side implies it is a continuation of the text on the front side," said Shira Faigenbaum-Golovin of TAU's Department of Applied Mathematics, another principal investigator of the study.

"Using multispectral imaging, we were also able to significantly improve the reading of the front side, adding four 'new' lines," said Sober.

A request for more wine

"Tel Arad was a military outpost -- a fortress at the southern border of the kingdom of Judah -- and was populated by 20 to 30 soldiers," said Dr. Mendel-Geberovich. "Most of the ostraca unearthed at Arad are dated to a short time span during the last stage of the fortress's history, on the eve of the kingdom's destruction in 586 BCE by Nebuchadnezzar. Many of these inscriptions are addressed to Elyashiv, the quartermaster of the fortress. They deal with the logistics of the outpost, such as the supply of flour, wine, and oil to subordinate units."

"The new inscription begins with a request for wine, as well as a guarantee for assistance if the addressee has any requests of his own," said Shaus. "It concludes with a request for the provision of a certain commodity to an unnamed person, and a note regarding a 'bath,' an ancient measurement of wine carried by a man named Ge'alyahu."

"The newly revealed inscription features an administrative text, like most of the Arad inscriptions," said Dr. Mendel-Geberovich. "Its importance lies in the fact that each new line, word, and even a single sign is a precious addition to what we know about the First Temple period."

"On a larger scale, our discovery stresses the importance of multispectral imaging to the documentation of ostraca," said Faigenbaum-Golovin. "It's daunting to think how many inscriptions, invisible to the naked eye, have been disposed of during excavations."

"This is ongoing research," concluded Sober. "We have at our disposal several additional alterations and expansions of known First Temple-period ostraca. Hence, the future may hold additional surprises."

Posted by Jonathan Kantrowitz at 2:26 PM