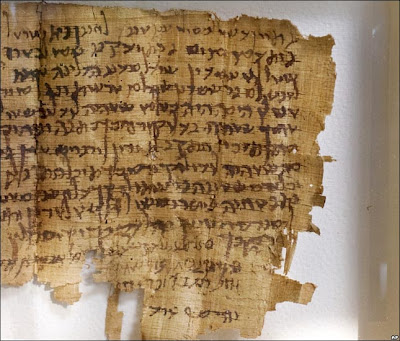 
Israeli authorities say they have recovered a papyrus document which appears to be nearly 2,000 years old. The document appears to concern the transfer of property belonging to a widow called Miriam to her late husband's brother. The document measures 15cm by 15cm (6in by 6in), and contains 15 lines of ancient Hebrew script.

The Israel Antiquities Authority (IAA) said on Wednesday that the scroll was an "exceptional archeological document, of the like but a few exist," reported Israeli newspaper Haaretz.

It said similar scrolls had been sold worldwide for sums as high as $5-10m.

According to the Israel Antiquities Authority (IAA), the document is written in a style of ancient Hebrew primarily associated with the Dead Sea Scrolls.

Unusually, the first line of the document indicates a precise date, the IAA said - "Year 4 [AD] to the destruction of Israel", which could indicate either AD74, four years after Jerusalem's Second Temple was destroyed, or AD139, four years after the date of a Jewish revolt violently put down by Rome.

The IAA's Amir Ganor cautioned that the document would have to undergo laboratory analysis to authenticate it.

Under Israeli law, all archaeological artefacts are state property.

But he expressed excitement about the discovery, suggesting that the "very important" document could "shed light on how the people of the period managed their affairs and supplement our knowledge about their way of life".
Posted by Jonathan Kantrowitz at 8:53 AM