Animal representations dating back to 3300 B.C


Noah’s Beasts: Sculpted Animals from Ancient Mesopotamia, a new exhibition on view at the Morgan Library & Museum, offers museum-goers the opportunity to experience the beauty and power of animal representations dating back to 3300 B.C. Bringing together for the first time sixteen works from the Morgan and a host of institutions across the country, the exhibition is a testament to the skill with which early sculptors evoked the animal kingdom in honor of their gods. The exhibition will run through August 27.

“The art, literature, and music represented in the vast collections of the Morgan Library & Museum take root in the culture of ancient civilization,” said Colin B. Bailey, director of the museum. “Noah’s Beasts brings to life one of the best known epics of that time. The sculptures in the show display both an attention to naturalistic detail and individualized stylization that are simply extraordinary.” 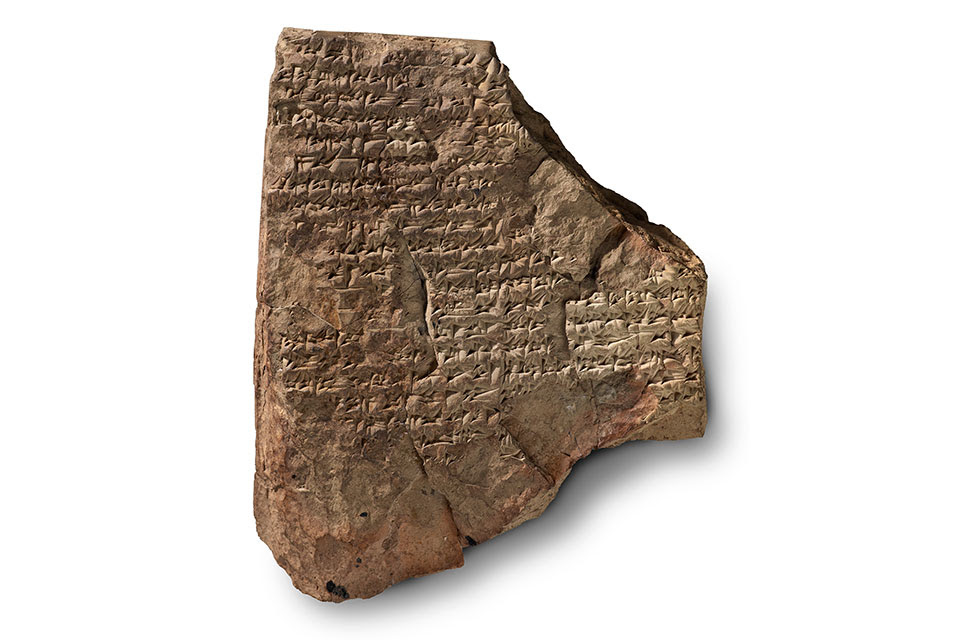 In 1872, George Smith, an assistant at the British Museum, astonished the world by translating a tablet from the seventh-century B.C., inscribed with a story of a long ago flood similar to that found in the Book of Genesis. Another much older tablet describing a great flood was discovered in 1898, and Pierpont Morgan, the founder of the Morgan Library & Museum, purchased it shortly thereafter. It dates to the reign of Babylonian King Ammisaduqa (ca. 1646-1626 B.C.) and forms the centerpiece of the exhibition.

Surrounding the Morgan tablet are sculptures made from stone and metal, which were rare in Mesopotamia. Several incorporate silver, gold, and beautiful inlays of shell and lapis lazuli. All of the pieces had Sumerian cultic functions and were created as a form of worship to the gods. Also included in the exhibition are six ancient cylinder seals with visual connections to the sculptures.

Archaeological evidence for devastating floods has been found at several sites in the flat alluvial plain of southern Mesopotamia, most notably at Ur, located in present-day Iraq. The flood narratives may have arisen as cautionary tales for humanity. The Epic of Atrahasis. an ancient narrative of unknown origin about man’s creation by the gods, is probably the source for the flood in the Gilgamesh Epic known from first millennium B.C. copies. Either directly or indirectly, the source for the Biblical flood story (Gen. 5:28–9:17) was likely the Gilgamesh Epic. The flood story is found in Jewish, Christian, and Muslim traditions, occurring in the Koran (Sura 11:25–48). Notable among the works on view is Head of a Lion (ca. 2550-2400 B.C.), one of a pair of attachments found in the dromos, or passageway, of Queen Puabi’s tomb at the Royal Cemetery at Ur. The locks of hair indicate the beast’s mane. The face is composed of bold, simple sculptural forms, round for the ears and face, triangular for the nose and muzzle. Incised striations for whiskers augment the fleshiness of the upper lip. The slightly open mouth suggests an incipient snarl, while the deeply inset, slanted eyes arrest a viewer’s attention. The entire piece is a masterful interpretation of the lion’s mesmerizing power. 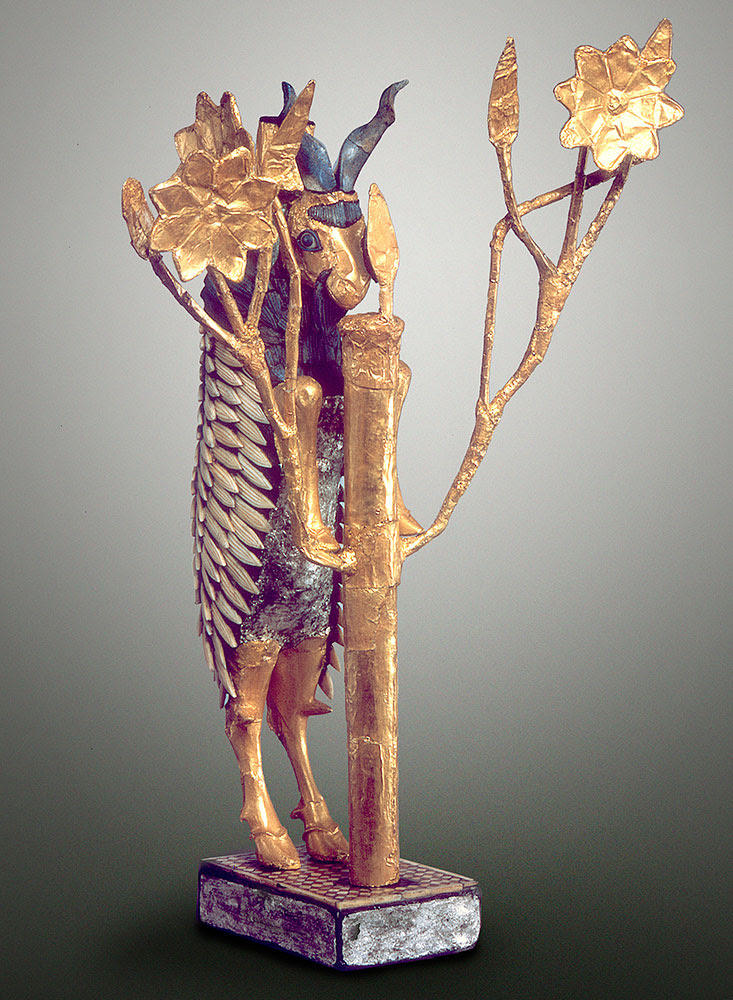 
Another splendidly preserved sculpture on view is among the most famous objects from the Ur excavations, called by the excavator “Ram Caught in a Thicket” (ca. 2550–2400 B.C.), alluding to an evocative passage in Genesis 22:13. The animal is actually a goat on its hind legs, resting its hooves on the branches of a plant. The gilded cylinder projecting from the goat’s neck originally supported a small tray indicating that the sculpture was an example of ritual temple furniture. The bud in the center will blossom, representing Inanna, the Sumerian goddess of love, wisdom and fertility. The male life force, represented by the goat, is eternally linked to the female life force, represented by the rosettes of the goddess. The composition embodies the interdependence of plant and animal fecundity essential for the survival of Sumerian agricultural society.


The group of accompanying cylinder seals shows animals in many forms. On one piece from the Morgan’s collection, Ewe and Ram Flanking Plant with a Gatepost (ca. 3300–2900 B.C.), the creatures are depicted in a kind of garden, nourished by a plant laden with fruit. With its entry bracketed by bundles of marsh reeds, the seal references a space sacred to the goddess Inanna, the queen of heaven, and foreshadows the idea of the Biblical Eden. 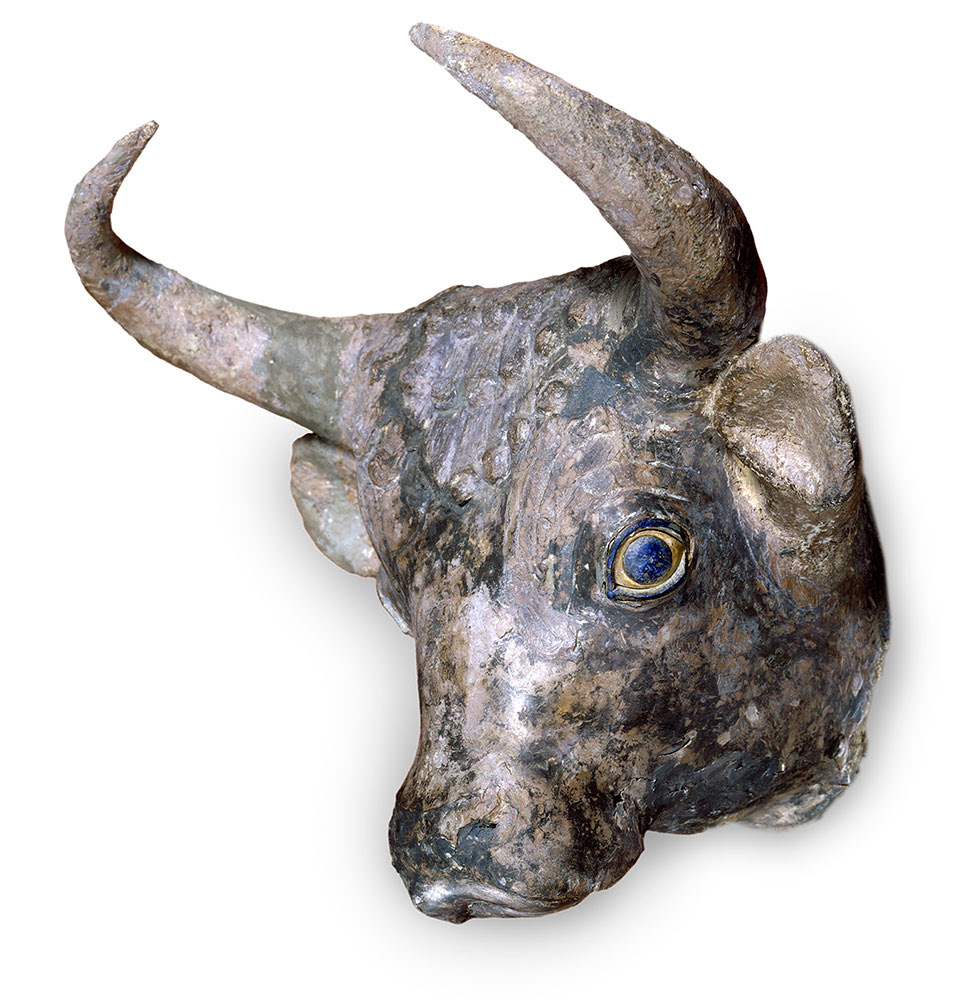 
In addition to works from the Morgan’s collection, Noah’s Beasts also includes pieces from the Metropolitan Museum of Art, the Yale University Babylonian Collection, the Kimbell Art Museum, and the University of Pennsylvania Museum of Archaeology and Anthropology.
Posted by Jonathan Kantrowitz at 8:11 AM