A well-preserved tomb of an ancient Mayan king has been discovered in Guatemala by a team of archaeologists led by Brown University’s Stephen Houston. The tomb is packed with carvings, ceramics, textiles, and the bones of six children, who may have been sacrificed at the time of the king’s death.

The team uncovered the tomb, which dates from about 350 to 400 A.D., beneath the El Diablo pyramid in the city of El Zotz in May. The news was made public yesterday during a press conference in Guatemala City, hosted by the Ministry of Culture and Sports, which authorized the work.

Before making the actual discovery, Houston said the team thought “something odd” was happening in the deposit they were digging. They knew a small temple had been built in front of a sprawling structure dedicated to the sun god, an emblem of Maya rulership. “When we sunk a pit into the small chamber of the temple, we hit almost immediately a series of ‘caches’ — blood-red bowls containing human fingers and teeth, all wrapped in some kind of organic substance that left an impression in the plaster. We then dug through layer after layer of flat stones, alternating with mud, which probably is what kept the tomb so intact and airtight.”

Then on May 29, 2010, Houston was with a worker who came to a final earthen layer. “I told him to remove it, and then, a flat stone. We’d been using a small stick to probe for cavities. And, on this try, the stick went in, and in, and in. After chipping away at the stone, I saw nothing but a small hole leading into darkness.”

They lowered a bare light bulb into the hole, and suddenly Houston saw “an explosion of color in all directions — reds, greens, yellows.” It was a royal tomb filled with organics Houston says he’d never seen before: pieces of wood, textiles, thin layers of painted stucco, cord.

“When we opened the tomb, I poked my head in and there was still, to my astonishment, a smell of putrification and a chill that went to my bones,” Houston said. “The chamber had been so well sealed, for over 1600 years, that no air and little water had entered.” 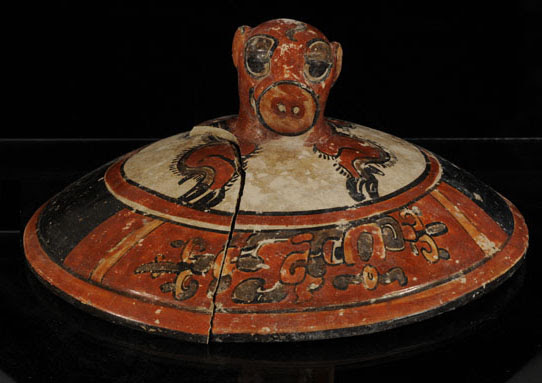 Mayan treasure: Looking into the tomb for the first time, archaeologists saw “an explosion of color in all directions — reds, greens, yellows. ... These items are artistic riches, extraordinarily preserved from a key time in Maya history. 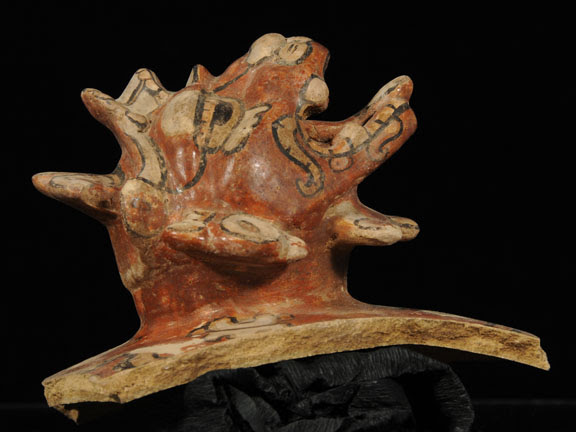 The tomb itself is about 6 feet high, 12 feet long, and four feet wide. “I can lie down comfortably in it,” Houston said, “although I wouldn’t want to stay there.”

It appears the tomb held an adult male, but the bone analyst, Andrew Scherer, assistant professor of anthropology at Brown, has not yet confirmed the finding. So far, it seems likely that there are six children in the tomb, some with whole bodies and probably two solely with skulls.

And who was this man? Though the findings are still very new, the group believes the tomb is likely from a king they only know about from other hieroglyphic texts — one of Houston’s specialties in Maya archaeology. “These items are artistic riches, extraordinarily preserved from a key time in Maya history,” said Houston. “From the tomb’s position, time, richness, and repeated constructions atop the tomb, we believe this is very likely the founder of a dynasty.”

Houston says the tomb shows that the ruler is going into the tomb as a ritual dancer. He has all the attributes of this role, including many small ‘bells’ of shell with, probably, dog canines as clappers. There is a chance too, that his body, which rested on a raised bier that collapsed to the floor, had an elaborate headdress with small glyphs on them. One of his hands may have held a sacrificial blade.”

The stone expert on site, Zachary Hruby, suspects the blade was used for cutting and grinding through bone or some other hard material. Its surface seems to be covered with red organic residue. Though the substance still needs to be tested, “it doesn’t take too much imagination to think that this is blood,” Houston said.

“We still have a great deal of work to do,” Houston said. “Remember, we’ve only been out of the field for a few weeks and we’re still catching our breath after a very difficult, technical excavation. Royal tombs are hugely dense with information and require years of study to understand. No other deposits come close.”
Posted by Jonathan Kantrowitz at 11:12 AM