After 3,500 Years More than 100 Impressive and Intact Ancient Cultic Vessels were Found

A natural hollow in the bedrock that was exposed in archaeological excavations by the Israel Antiquities Authority prior to the installation of the northern gas pipeline by the Israel Natural Gas Lines Company, at the foot of Tel Qashish (Tell el Qassis), did not cease to provide ancient surprises. For two weeks archaeologists of the Israel Antiquities Authority excavated the contents of the rock-hollow and removed from it more than 100 intact cultic vessels and other extraordinary items that are c. 3,500 years old. Again and again, every time the excavators thought they reached the bottom of the cavity a new and fascinating layer of complete vessels was discovered beneath the one that was previously dismantled. In the past the ancients would descend into the rock-hollow by way of two broad, hewn steps. Inside the cavity whole vessels were found piled one atop the other and other vessels were broken by those that had been placed upon them. Among the finds that were recovered: a cultic vessel that was used for burning incense, a sculpted face of a woman that was part of a cultic cup used in dedicating a libation to a god, goblets and bowls with high bases and tableware that was intended for eating and drinking. Other vessels that were found had been brought from Mycenae in Greece, including a storage vessel for precious oils – evidence of the ancient trade relations that existed with Greece.

According to archaeologists Uzi Ad and Dr. Edwin van den Brink, the excavation directors on behalf of the Israel Antiquities Authority, this is an extremely rare discovery. Until now no such pits as these have been found from 3,500 years ago. It is also extraordinary to find scores of vessels that are in such a good state of preservation. In most excavations fragments of pottery vessels are found, whereas here the vessels were removed from the rock-hollow intact. Each object was removed with the greatest of care, was drawn and documented and revealed beneath it a wealth of other finds. The vessels are numbered and their precise location in the heap is recorded for future research. According to the archaeologists, it is obvious that considerable time and thought were invested in the placement of the vessels in the rock-hollow, as evidence by the different kinds of vessels that were buried separately. 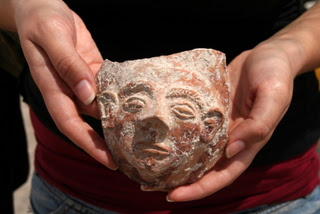 Archaeologists van den Brink and Ad have various theories regarding the purpose of the rock-hollow.“It would appear that the vessels were used in a pagan cult that worshipped idols. During this period it was customary that each city had a temple of its own where special cultic vessels were used”.

At the end of the Late Bronze Age (the Canaanite period) the region was invaded, including Tel Qashish, which was destroyed by a fierce conflagration, along with nearby Tel Yoqneʽam. Therefore, one of the theories is that the vessels were buried in order to protect them from the impending destruction.

Another possibility is that the cultic vessels that were employed in the rituals practiced in the temple were buried after they were no longer used. Since these artifacts were part of the ritual ceremonies a special place was allocated for them and unlike other vessels they were not discarded in the garbage. The Israel Antiquities Authority plans on presenting these special artifacts to the public this coming year, in an exhibition within the framework of the twentieth anniversary of its establishment. Notification about the opening of the exhibition will be announced separately.
Posted by Jonathan Kantrowitz at 5:24 AM